What is Human-Centred AI and Its Design Principles?

Human-Centered AI design's main idea is not to design products only because they are interesting. We have to think about humans who will interact with AI products.

Human-Centered Artificial Intelligence design always starts with people and what is desirable from the human perspective by considering what people want and what people need. It means always put humans at the center and always use empathy as a core value.

While designing Human-Centered AI, there is a need to think about what is feasible from a technological perspective. Always believe and understand what data can do, what data science can do, and what AI can do. What is desirable for humans, and what is feasible from a technological perspective. There is a requirement to think that this is viable for the business. Sometimes, it may be technologically possible, but if it isn't feasible for a company, that's not really what our clients will be interested in. Innovation is always at the center point of desirability, feasibility, and Technology.

With the promise of Artificial Intelligence, there is a lot of focus on feasibility. But for humans, if we are considering that AI can solve the problem. It doesn't mean problems and challenges need to be solved only at the human or process levels.

Another thing that needs to be understood is don't believe that data is true. Data is data, and humans create data. For example, in the videos, we use data to train models; the data scientist will add biases and blind spots when creating data and data sets. If humans are not careful, we must always be cautious that we are not over-indexing on data. We still want to think about what biases and errors we might bring to data.

To make Human-Centered AI products, services, and systems dynamic, adaptive, and capable of learning, There is a need to understand and solve human problems.

As artificial means fake. Suppose we are adding artificial sweeteners to a coffee. In that case, that doesn't sound good, so there is a need to understand and use more augmentation instead of the artificial keyword.

What are the Principles of Human-Centered AI when Designing with Data? 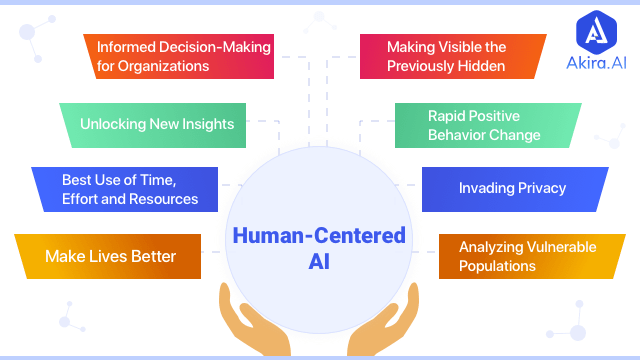 Listed below are the Principles that need to keep in mind when designing with data are:-

We are working with data in different ways, from Machine Learning to neural networks to predictive Analytics. These things help us to solve problems. But again, we have to use Technology, not for Technology's sake but bring the technologies and capabilities to solve the real human problems. Some principles that need to keep in mind when designing with data are:-

Human-Centered AI makes humans' lives better; for example, suppose we have to build a proof of concept(POC) to create an Empathy machine for an exhibition. The idea would be to use augmented intelligence to learn about each other and empathize with each other. If humans communicate mostly through screens, we must make sure that we are not losing human connection. We have to use Technology, not for Technology's sake, but what can we learn about each other and make our lives better.

Human-Centered AI can serve people well. For example, I am doing some transactions, and for OTP, I need to look at my mobile. Suddenly, I came to know that it was lost now. The most exciting thing about this is that the Bank knew my mobile was lost before me and blocked all my credit cards. Now, the question arises of how it is possible. Banks have so many algorithms that can quickly notice something anomalous and get in touch and get confirmation. So that's a way to use data to inform better and guide organizations.

Businesses increasingly rely on AI to make important decisions and embrace AI in the business workflow by adopting Artificial Intelligence.

There is a lot of medical data globally. As humans, we can move so fast in looking at the date to review medical records, making connections. With the predictive power and processing of data today, we can unlock many new Insights, like drug interactions. Typically people can study a drug and its side effects. We can open new insights about the impossible drug interactions with the processing power before making visible the previously hidden patterns.

Same way, in the case of anti-money laundering of banks or organizations. You could figure out that this is suspicious activity on an account in the past. But, Now, through network analysis, you can figure out what's suspicious activity here. How these people are related, maybe something is going on, or perhaps that's a connection. So, we can uncover money laundering activity by using Neural Network analysis.

Doctors believe that better sleep is better for not everybody but athletes only. So doctors use data that help people to track their sleep. They generate insights from data by correlation with human coaching and support networks to help people see how they are sleeping and prompt people to sleep well. It helps people have the right balance of life by showing people what they need to know and then using other support to affect behavior change positively.

Best Use of Time, Effort, and Resources

Human-Centered AI also focussed on the proper utilization of time, effort, and resources to support and power, and delight others. Many years ago, the headline in one of the newspapers that computers took 360 thousand hours of billable Lawyer time. The idea is that people always want more time for thinking and learning to be creative, but they can't because they have a lot of other tasks to do. Most people want to know what's going wrong, and these are some of the things that we think around a lot when we are designing with data.

Marginalized, vulnerable people always ignore vulnerable populations. So, in research like family planning and sexual behavior, most of the research done until now has been on populations known as weird, Western-educated, industrial rich, and democratic countries. So it means that if you are not in those categories, policies, and initiatives signed for those categories are not being considered. So, we have to think about what we are studying, where we study, where we live, and its effects.

There are many occasions where we see that Data Privacy breaches. A few years ago, one of the social media platforms posted commercial transactions you made on the wall. The issue arose if someone purchased a diamond ring for his girlfriend. After posting it on social media, he started receiving congratulation messages from all of his friends and his girlfriend within a few minutes, but he hadn't proposed yet. So, they promote merchants and invade privacy, taking away agency and choice from people without thinking through the consequences.

Read more about Ethical AI in Healthcare and its Principles.

The idea behind the Human-centered AI approach is to always think about the people behind the data, whose data is, how we are using it, that data identify people, or if they consent to it.

Human-Centered AI data designers should follow GDPR Guidelines while designing solutions with a human-centered regulatory approach. They should inform people of what data designers are doing with data in each instance and get explicit consent.

With the change in teams and corporate strategies, data can be sold to other groups. So, data designers have to think about what data they are collecting now and what might happen to it going forward. Organizations are using anonymized data for many reasons; they learn from them but don't know what will happen if they sold it further to someone. The major challenge is the data currently collected and used for particular purposes, but the challenge is how and who might use it in the future. For example, after cities use Passport information for non-citizens to get ID cards to register for services. Imagine the change in the immigration landscape, how dangerous it can be for people—a violent use of this data, what if it gets collected or gets into the wrong hands.

Impact at scale: Sometimes, individuals, as well as groups and communities, can be impacted. For example; In transportation, AI helps people reach their destination by showing what streets to go to, which community to avoid. Sometimes, it sends you through a neighborhood by showing that there is not much traffic in that neighborhood. The neighborhood area can become congested with all kinds of traffic when people try to save 5 or 10 minutes at the individual level. It can be useful for that individual who is getting to work 5 minutes faster but tough for neighborhoods when many streetcars come down their streets.

Before designing any real-time solutions, data designers should understand Human-Centered AI Design with personal and community perspectives. They should think about where data goes, where does Design go. Sometimes we don't know why or where it will go in the future. Still, we have to think like if a benevolent user used it, what would be the outcome and what would be the outcome if it was used for a non-benevolent user.