Introduction to AI in Healthcare

Artificial Intelligence (AI) offers various opportunities for the Health industry. AI makes better and quicker decisions in health care. Big data and AI systems can make decisions for the diagnosis that humans cannot. Such as detecting atrial fibrillation from an electrocardiogram. AI for health is divided into subtopics:

But most of the health industry's AI systems function as a black box. It means systems are opaque; they are not explaining the cause of their output. Therefore, users cannot understand how a system reaches a particular result. This results in a lack of trust and confidence in these systems. They are not adopting that system, especially where an explanation is crucial. For this, Explainable AI came into existence. It explains the model. It provides the reason behind each prediction of the model. It explains which data is contributing, why it is selected, and its works.

When do we need an Explanation?

Not all AI systems need to explain. There are some cases where only we require an explanation. It is necessary to know which system requires an explanation before making that system. So that developers would be able to use a suitable strategy. The following are some points listed down from where we can get to know when our system must explain.

When Fairness is Critical: The system should explain the systems where fairness is mandatory, and people cannot compromise with fairness.

Predictions are crucial and have an essential and widely effective impact on far-reaching consequences. Such as recommending an operation, recommending to send a patient to hospice, etc.

When the cost of a mistake is high, the system's explanation is mandatory where the system must provide the correct result. And if it is mispredicted, it can cost a high or a life. For example, misclassification of malignant tumors can be dangerous for a person.

When compliance is required, the system should explain when it is mandatory for privacy concerns of data or a right—for example, GDPR (General Data Protection Regulation).

When trust is necessary: When required to gain the user's trust and confidence, the system should explain how it reaches a particular output. It should tell the feature, parameters, and model that it uses.

Why do we need Explainable AI in Healthcare?

Healthcare is an industry in which some use cases demand an explanation. For many fields except healthcare, AI systems' black box functioning is acceptable. Sometimes, users want their system does not reveal the logic as it is desirable to keep their logic secret and private. But in the case of Health care, where mistakes can give dangerous results, black box functioning is not acceptable by the doctors and patients. As we know, doctors are well trained to identify diseases and provide treatment. Suppose our AI system is not trained properly on correct data, then how it can diagnose patients. Therefore it isn't easy to trust the system as users cannot be sure of its result. We have to use Explainable AI to overcome machine learning's opaque nature to support Explainable AI's basic principles, such as transparency, fairness, etc.

The Five Biggest Healthcare Trends That Everyone Should Be Ready - Forbes

Let's discuss a case to understand better why we need Explainable AI: An AI system that can detect cancer in Caucasian skin rather than dark-skinned people. It misses potentially malignant lesions on dark skin. So they recognize that this system is providing a biased output. The result of this misjudged output can be dangerous here for the life of some subpopulation. After that, it is noticed that this bias is coming due to insufficient data. The data used to train the system does not contain much about the dark skin. Therefore our system needs more transparency and explanation about its result, data, and prediction model.

What are the Principles of Explainable AI in Healthcare?

The explanation is essential in healthcare, where its consequences can bet for a person's life. According to this principle, the system will provide a reason for each decision. The system predicts the likelihood of admitting patients to the hospital's emergency department. In explanation, the system will focus on the major three questions as these three factors are generating the output.

These questions help to understand whether the system is working correctly or not. So they can make decisions whether they will use that system or not. They can also give the reason for the output. Our example system predicts that Malin(patient) has a low likelihood of 28% to be admitted to the hospital. The system predicts that from his age, signs, and medical history. The system also explains the reason for its prediction using visualization.

An explanation that the system providing is significant. It will be understandable by the targeted user. The system is providing different explanations for different groups of users. It will be different for the end-user and the developers according to their prior knowledge and experience. If a user can understand the information, it means it is meaningful. The explanation that the system provides should be understandable to the targeted recipient. For example, Figure 1.2 is representing a linear model. It is difficult for a recipient to understand model B's features who don't know models and statistics. Because model two explains some statistical variables, this explanation will be meaningless. But if this explanation is for developers, they can understand it and become meaningful. 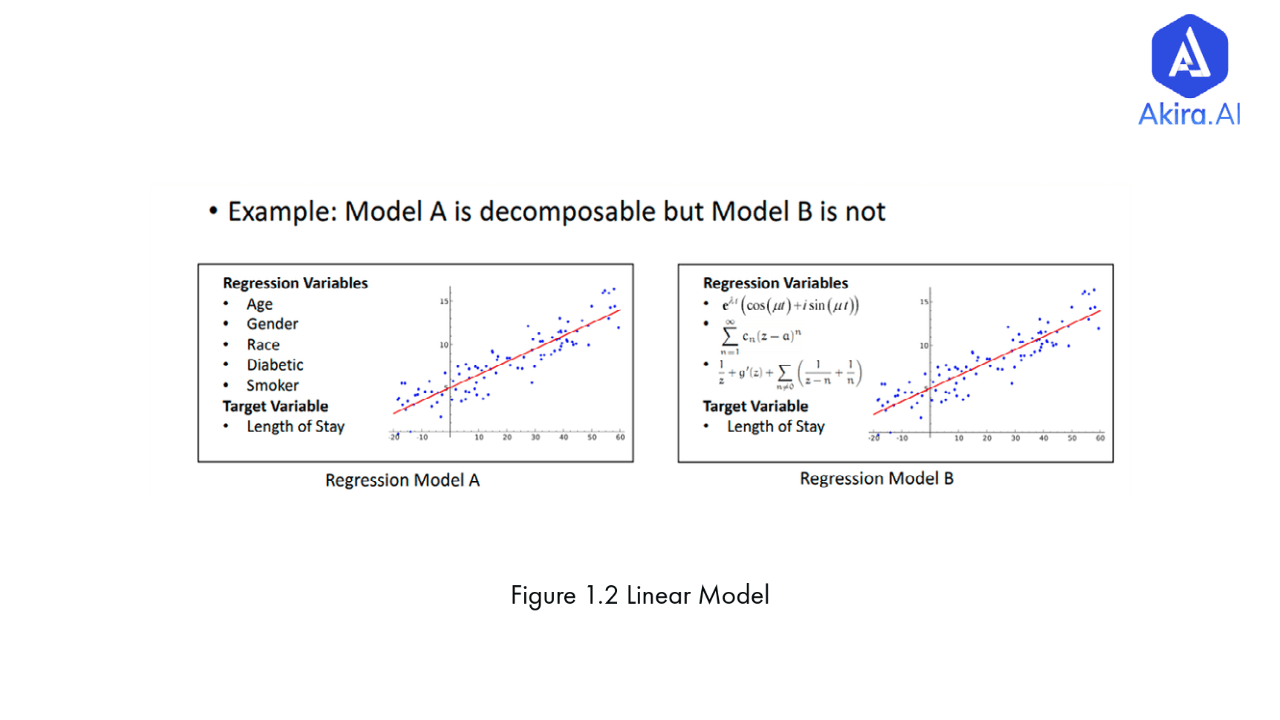 But if we talk about Figure 1.3. This figure predicts readmission rates according to the risk when they fall sick. In this example, the system predicts patients have high risk and have to readmit to the hospital. This system is also giving the reason for its predicted output. Figure 1.3 shows the explanation of predicting high risk from the values of the patient's features. 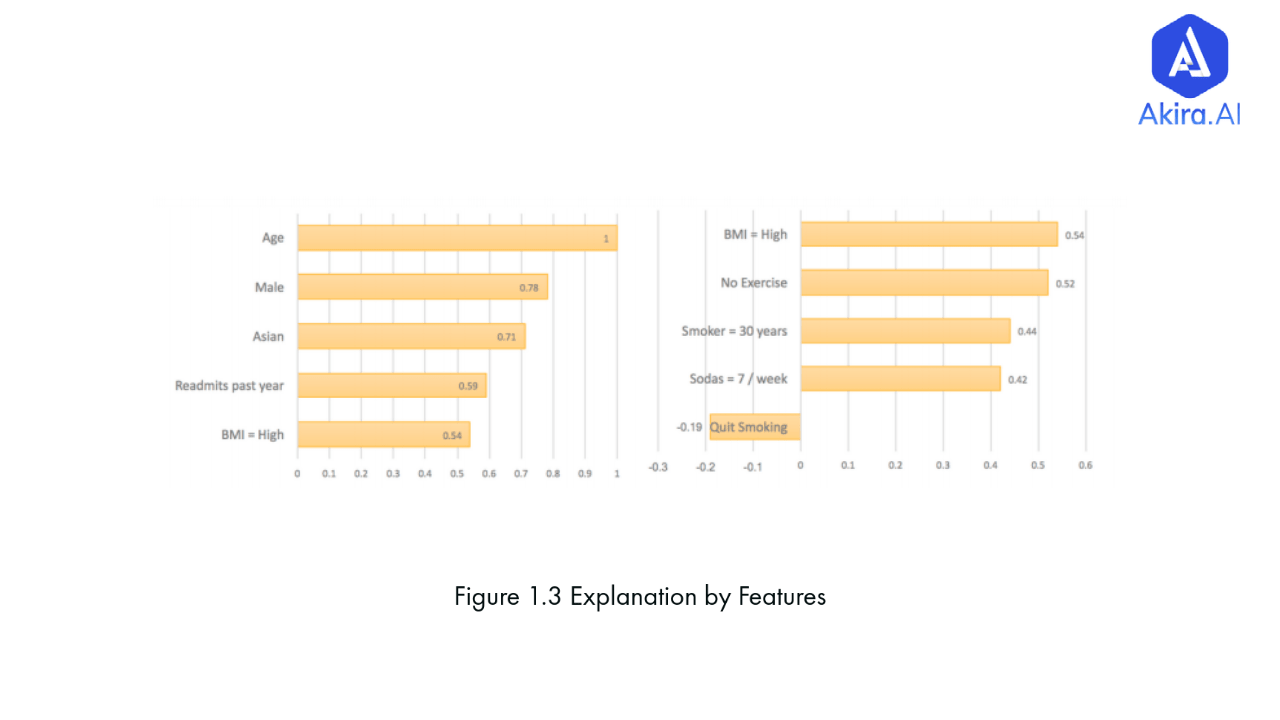 We can explain the algorithm and model to the developer to understand how the model and algorithm works because they can understand them. But for patients, we can provide the data and parameters that are using and giving the output.

This principle states that explanations should be accurate. Our system explains the same procedure the AI system used to generate output. Because if it generates the wrong output, it can harm a patient's life, significantly when the system predicts a chronic disease in which it is compulsory to take immediate action. This can also be possible because patients know that generating is wrong and losing customer's confidence. For example, there is a system that is predicting whether a patient has cancer or not. If the system gives false explanations, then It can be possible that the system predicts correctly that patients don't have cancer, but its explanation shows a chance of cancer. The explanation may be wrong, but it can lose the customer's confidence. Therefore we should use the correct tool and correct way to represent the system's explanation.

Knowledge limits prevent the system from giving an unjust and fallacious result. Hence users can assure that the system will never mislead. It will simply show the outcome that will be set for the system. For example, it may be possible that the system will get a different feature or scenario rather than giving false results about which system doesn't know our system will provide that these inputs are out of the topic. For example, a system is typically for predicting skin cancer. But by mistake, a user provides different parameters such as predicting diabetes. Here rather than putting the patient's life into danger by giving the wrong result, the system will say that the input is totally out of the topic and wrong.
Handling this system can be designed as if the system encounters a different situation and can generate results out of topic.

What are the Challenges of Explainable AI in Healthcare?

There are some challenges in the normal AI system that should be considered in health care. Explainable AI reduces these challenges.

1. Transparency: Transparency is the foremost principle of Explainable AI. It is the algorithm, model, and features understandable by the user. Different users may require transparency in different things. It is providing a suitable explanation for suitable users.

2. Fidelity: The system provides a correct explanation. It should match with the model performance.

3. Domain sense: The system provides an explanation that is easy to understand for the user and makes sense in the domain. It is explaining in the correct context.

4. Consistency: Explanation should be consistent for all predictions because different explanations can confuse the user.

5. Generalizability: The system should provide a general explanation. But it should not be too general.

6. Parsimony: The explanation of the system should not be complex. It should be as simple as possible.

7. Reasonable: It accomplishes the reason behind each AI system's outcome.

8. Traceable: Explainable AI can track the logic and data. Users get to know the contribution of data in the output. The user can track problems in logic or data and solve them.

Benefits of AI in Healthcare Industry

Explainable AI provides us with many benefits, but we will understand some of them here.

The main challenge in an AI system is a customer's trust. Opaque AI systems provide the system's output without reason or Explanation. Therefore, It becomes challenging for the customer to trust the machine that does not explain, especially in the healthcare system. Various questions come to the customer's mind that the opaque system cannot answer, as Figure 1.1 shows. Due to this incompetence of opaque AI systems, they are not adopted by the patients and the medical practitioners. 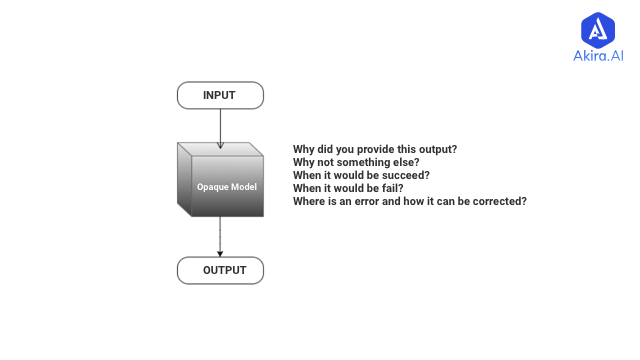 To overcome the challenge, Akira AI explains their opaque AI systems. It answers the questions that arise in the customer's mind while using the AI system. It makes an AI system more reliable and productive by providing trust, transparency, and fidelity. To answer all these questions, Akira AI uses Explainable AI.

The figure below depicts that the customer can answer its question to understand the model and its working.

As already discussed, most of the AI system is not answerable for their result, which can sometimes harm the society or the user by providing wrong results. Explainable AI and its principle bring a change in the system's traditional functioning and explain their algorithm, model, and features it uses. With transparency, AI systems can become fair and flawless in the Health industry.